As most of you know, my personal style often sways toward a rock & roll aesthetic. I naturally gravitate to anything with leather, fringe or studs and believe that boots are (almost) always a good idea.

After psychoanalyzing myself, my unprofessional opinion is that perhaps I like to create a tough exterior to balance out my rather soft interior. I’m naturally a fairly shy people-pleaser so sometimes I want to project that I’m a badass. Enter the black and leather. In a way it makes me feel powerful. Like if my outfit says “don’t fuck with me,” then no one will. Plus, I really just like the way it looks. 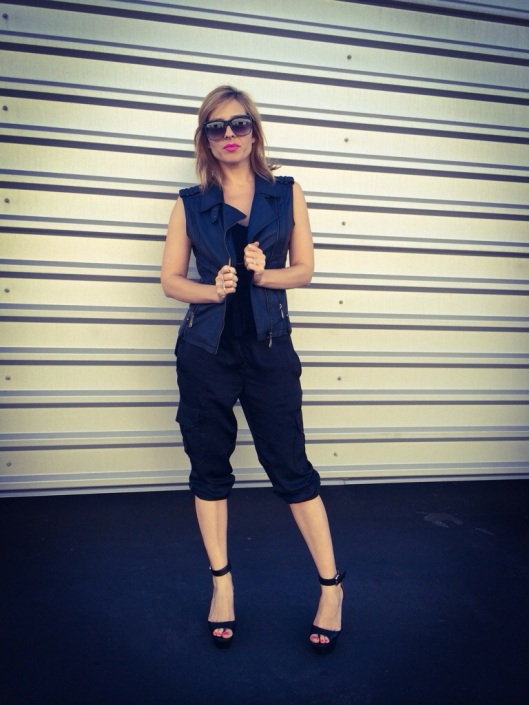 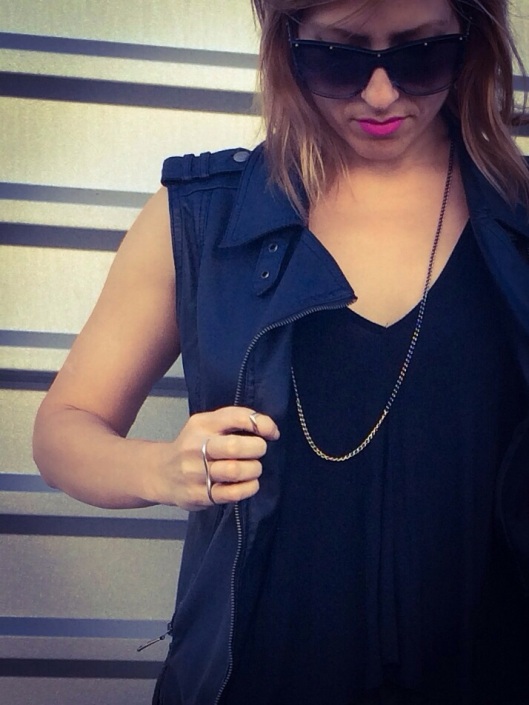 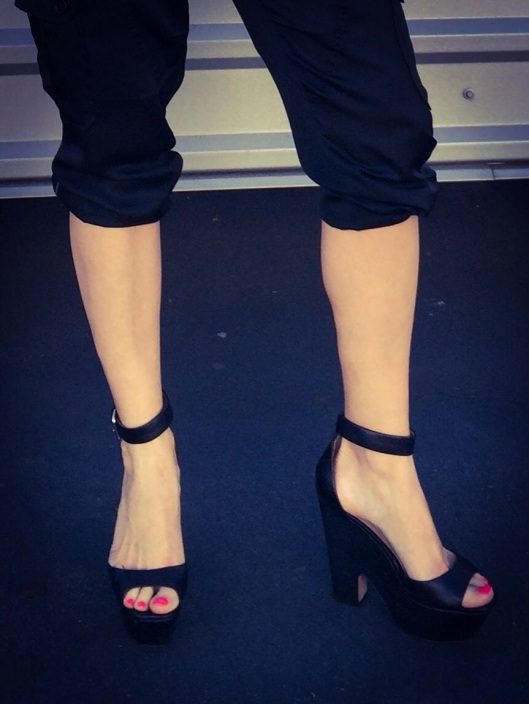 It’s almost embarrassing how excited I get when I discover a new way to style pieces I’ve had in my closet for a while. While this Twelfth Street by Cynthia Vincent romper gets plenty of time off the hanger, this BCBG top hardly ever gets to venture out into the world.

I’m not sure why, it’s a cute piece, but it just never seems to be quite right. With blue jeans it feels too basic, with black it feels clashy. It’s just one of those things where you put it on with every intention of wearing it, but 10 pant-changes later you just end up scrapping it before you leave the house.

But, alas, I have found its match! Here’s how it happened: I was staring at my closet, trying to find a light coverup to wear over this sleeveless romper when suddenly this blue hue caught my eye. I noticed how complementary the colors are, so I slipped it on and voila! My one-piece romper became a new two-piece look, and my neglected top got some well-deserved wear time. All it took was a little creative styling.

Hello and Happy New Year to all! I hope that each of you enjoyed a wonderful holiday season filled with family, friends, love and laughter. As we are thrust into 2014, I can’t help but feel a sense of disbelief (and slight panic) at another year gone.

Since we aren’t getting any younger and there’s so much to see in the world, the hubby and I decided to take a mini Euro trip right before the holidays. Our itinerary included 10 days split between London, Paris and Amsterdam.

First, some highlights from the fascinating, charming, historically-rich city of London…enjoy! 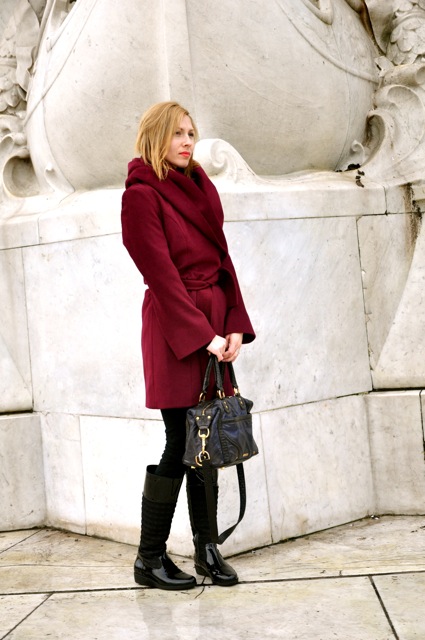 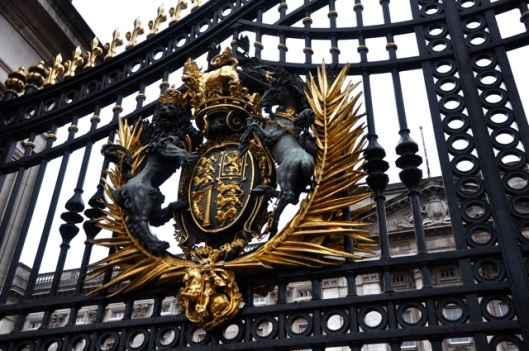 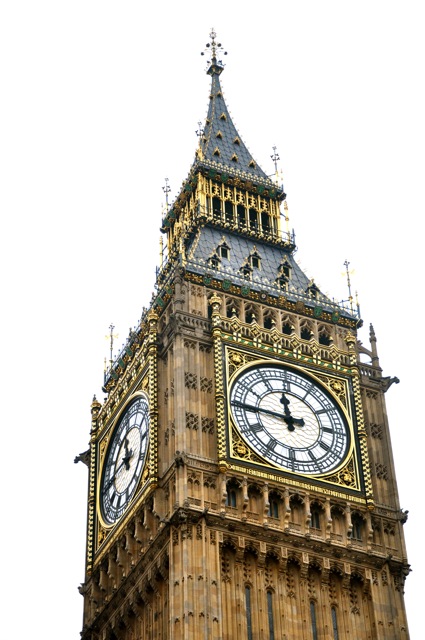 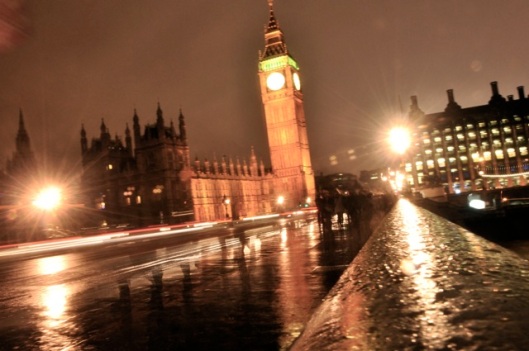 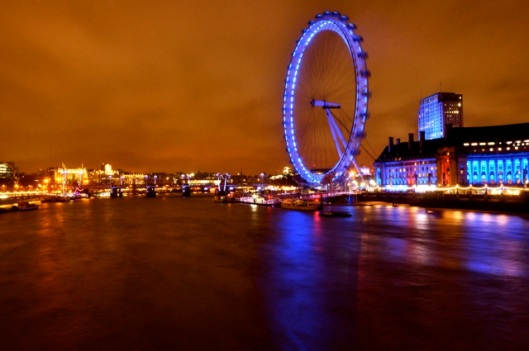 Chapter 4: The Tower of London

This royal palace and fortress held the executions of many a famous Englanders including King Henry VIII’s second wife, Anne Boleyn. Guarded over by Yeoman Warders (also known as Beefeaters – where the gin got its name), the Tower is the home of The Crown Jewels and served as the residence to Kings and Queens for nearly 500 years. Its brutal yet fascinating history is superceded only by its impressive architecture and still-fully-functioning role in the modern British monarchy.

A Yeoman Warder aka Beefeater. Guards of the tower/amazing tour guides 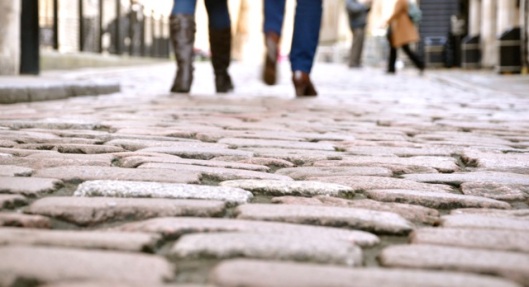 Unfortunately no cameras allowed inside. But take my word for it, they’re STUNNING.

Look closely…I think there’s a ghost from the Tower walking through our shot.

Please accept my apologies for my hiatus the past few weeks. Busy weeks fed into busier weekends and before I knew it September had come and gone (and then half of October!).

While I was away from blog land, I decided to go even shorter with my hair. I can’t get enough of this messy long bob look. With celebs like Jennifer Lawrence and Heidi Klum also going for the chop this year, I can’t help but think I started a trend. Ok, I might be reaching, but it’s a fun thought. This cut makes me feel confident, in vogue and refreshed—I’ll be keeping it around for a while.

To debut my shorter ‘do, I chose a long flowing skirt to create a stylish juxtaposition. I kept the look simple by pairing the skirt with a vintage cami and sky-high platforms, and added a textured skinny belt to break it up a bit. The result? Effortless chic for day or night. 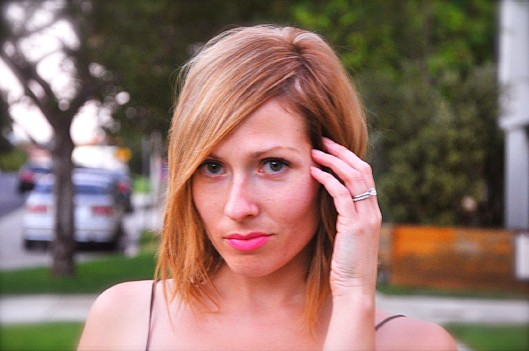 With all the back to school buzz that’s been in the air, I couldn’t help but put together my own school-girl inspired look. While it’s not a plaid skirt and knee-high stockings, there’s something very prep-school-meets-street-style about the final product. Gold studs and leather shorts put my own personal spin on the trend and take it from elementary school to master class. Let’s just say if we were on the Upper East Side, I’d be giving Miss Queen B, Blair Waldorf, a run for her reign on the steps of the Met. Studs beat headbands every time.

Feeling the back to school trend? Style your own look and share with me on Twitter/Instagram @herwritemind. Can’t wait to see! 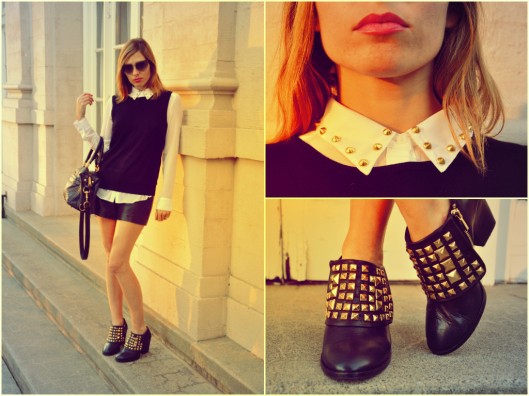 If there’s one thing that I dislike about summer, it’s that the warm temperatures can hinder my affinity for leather. We’ve all seen the Friends episode where Ross sweats in his leather pants – it doesn’t end well for him and it was enough to teach me to proceed with caution on the leather situation (see, you CAN learn from TV!).

Alas, laser cut leather is here to save the sartorial day. With its intricate patterns and built-in breathability, it’s a current trend of choice for this leather-lover. A sheer draped back makes this style especially warm-weather-ready.

Teamed with black skinnies, wedge sandals and a mini arm party, this easy top gives me a defined look and keeps the heat stroke at bay.

Sheer blouses with cutoffs has become my unofficial summer uniform. I love how flowy, diaphanous fabric can transform a traditionally preppy button-down into a subtly sexy shirt that’s perfect for sunny days. On weekends, I usually slip one on with a bralette or bandeau to get the most out of the laid-back look.

This top by Free People has a casual oversized fit and the pattern begs to be worn with denim. These Car Mar cutoffs from LF are easily my favorite because they aren’t too short, too tight and are just the right amount of distressed. When I’m in cutoffs, I want to be comfortable, and an inseam that rides up is less than ideal. Also, I’m older than 16 so booty shorts are out of the question. Let’s be honest…no one wants to see that.

All in all this look keeps me cool, comfortable and, even though the top is sheer, I don’t feel overexposed. It’s just right for warm LA days! 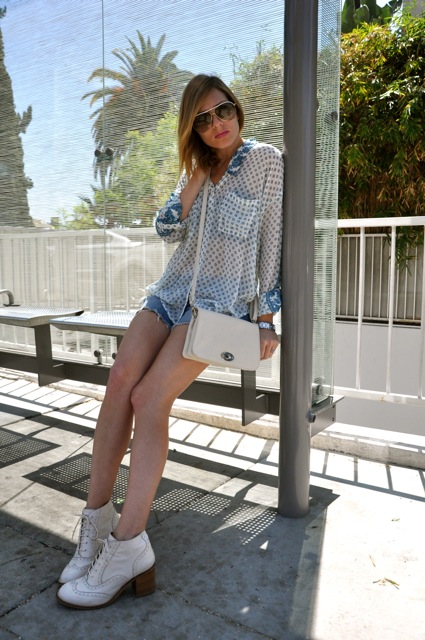 One of my most important styling rules is balance. If you’re wearing something short and fitted on the bottom, opt for more coverage and a relaxed fit on top. Finding the right balance is key in creating looks that aren’t overly sexy or, on the other end of the spectrum, overly conservative.

When I pulled this studded mini out of my closet, I knew that I needed long sleeves to get the right look. I landed on this butterscotch-colored knit to bring out the golden tones in the embellishment and add a laid-back contrast to the skirt. My new (old) Marni wedges that I picked up from the designer resale mecca, Decades, finished the look with sharp lines and a touch of shine. 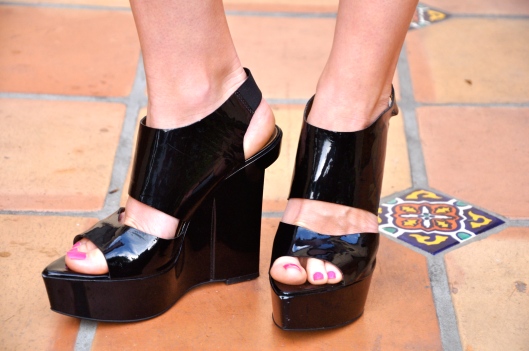 It’s official: the crop top is back. And this time it’s not just for tees and tanks. Chic, polished crops are gracing the pages of fashion mags and have won over the front-row fashion crowd. This time it’s all about crops with high-waisted pencil skirts or wide-leg pants. A classic silhouette on the bottom tones down the bold top and reveals just a hint of skin.

As with any big trend, getting the look right is about balance. When trying something more daring, keep the rest of the look simple. Mixing trends on trends on trends rarely works out to your advantage, and it pays to find the right pieces.

When I came across this faux-leather crop at a boutique in my neighborhood, I knew it was the one that would lead my journey into the intimidating bare-midriff territory. While it took a while to find the right skirt to pair it with, this color-blocked black and white pencil style eventually made its way into my life (via a Zara blowout sale – go now!) and the final outcome makes it clear that it was worth the wait.

What do you think of my cropped look? Are you willing to give it a try? 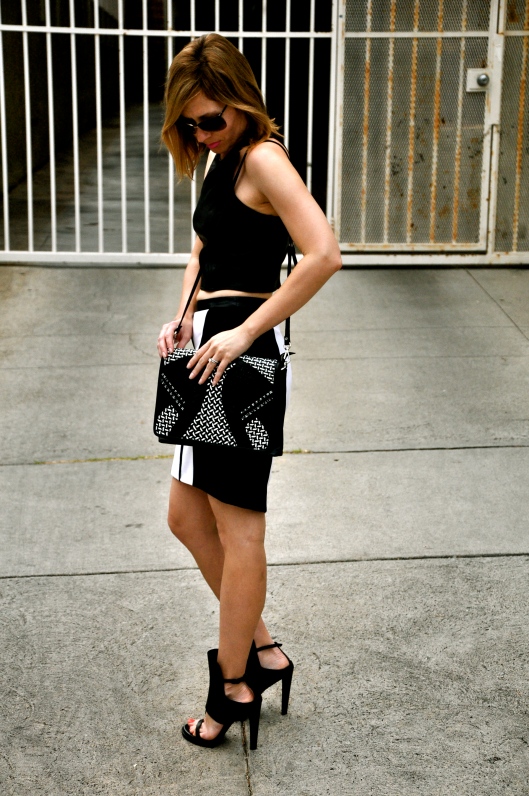 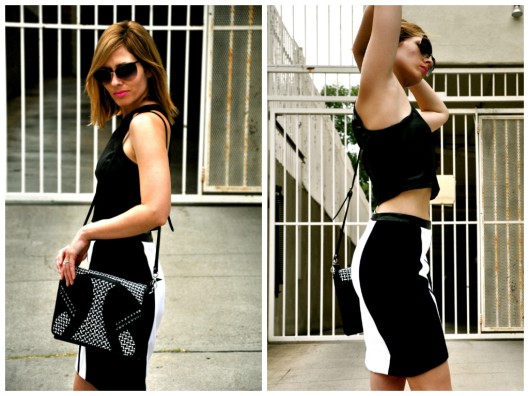 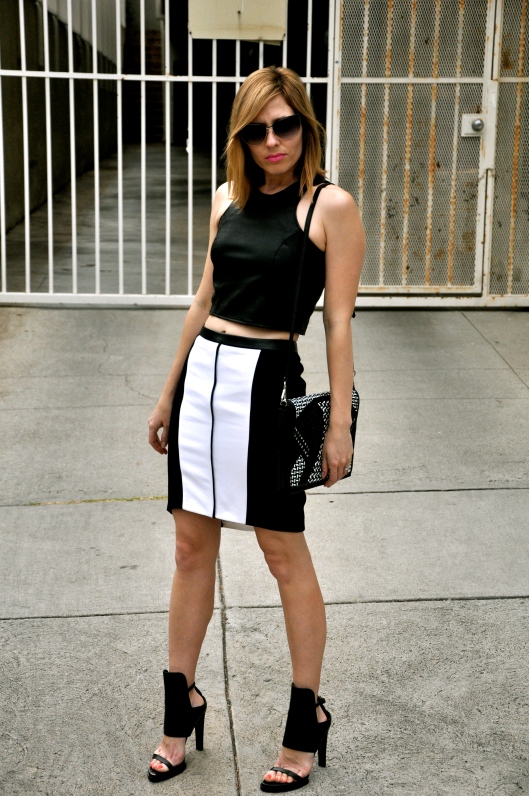