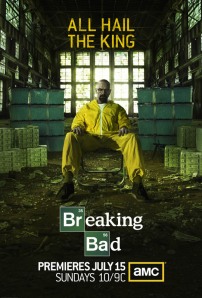 If you’re not already a fan, you’ve surely heard of it. It’s the endearing, surprisingly not-so-outrageous story of a high school chemistry teacher faced with terminal lung cancer. Instead of focusing on his treatment, he turns to cooking meth to make quick money so he can leave his family with a comfortable financial situation when he dies. In his mission to care for his family as he faces his imminent death, Walter White quickly climbs the ranks of the drug world due to his premium product — the most pure meth anyone’s ever seen.

With its truly engaging and original story, Breaking Bad takes you on Walter’s transformation from nerdy chem teacher to a powerful, in-demand drug manufacturer who will stop at nothing leave his family in a good place. Bryan Cranston leads the cast of ridiculously talented actors into the fifth and final season of the series that begins Sunday, July 15.

Make some space on your DVR to record season 5 while you watch the first four seasons on Netflix. Its addictive nature will have you caught up in no time.